British leading lady groomed by the Rank ‘charm school’, whose career was hampered by alcoholism

Susan Shaw quit acting in the early 60s and worked in various jobs, including as a barmaid and a nightclub hostess. Died penniless, of cirrhosis of the liver. Married actors Albert Lieven and Bonar Colleano. Her son, Mark Colleano, appeared in a few films in the late 60s and early 70s. 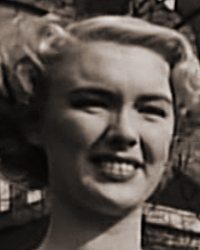 The Woman in Question (1950)
Catherine Taylor