Barbarella is marked by the same audacity and originality, fantasy, humour, beauty and horror, cruelty and eroticism that make comic books such a favourite. The setting is the planet Lythion in the year 40,000, when Barbarella makes a forced landing while travelling through space. She acts like a female James Bond, vanquishing evil in the forms of robots and monsters. She also rewards, in an uninhibited manner, the handsome men who assist her in the adventure. Whether she is wrestling with the Black Guards, the evil Queen, or the Angel Pygar, she just can’t seem to avoid losing at least part of her skin-tight space suit!

When Virna Lisi was told to play the part of Barbarella, she terminated her contract with United Artists and returned to Italy.

SoGo, the evil city Barberella travels to, is a reference to Biblical cities Sodom and Gomorra.

The ’80s pop band ‘Duran Duran’ took their name from the character in the film played by Milo O’Shea.

Future Pink Floyd guitarist David Gilmour was one of the session musicians who performed the film’s original score. 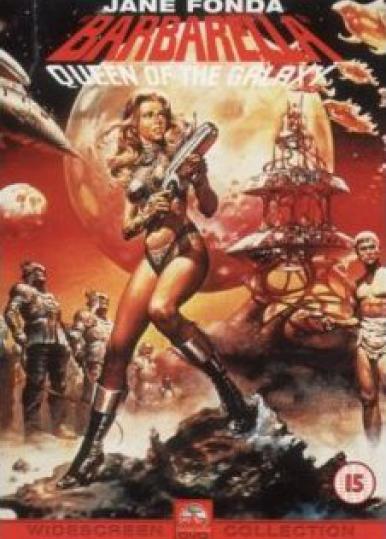