Born in London, Margaret Rutherford studied at the Royal Academy of Music, and worked as a piano teacher; she was 33 when she started her professional career, studying at the Old Vic School and acting in various repertory theatres. The daughter of a man who had spent seven years in Broadmoor criminal asylum for killing his father, and a mother who committed suicide, she suffered from several nervous breakdowns, fearing that she, too, might go mad. Married Stringer Davis in 1945.

Her best roles were as Miss Prism in The Important of Being Earnest, Madame Arcati in Blithe Spirit, Headmistress Miss Evelyn Whitchurch in The Happiest Days of Your Life and the Duchess of Brighton in The VIPs, though her most popular role was probably as Agatha Christie’s detective Miss Marple in four films.

The Happiest Days of Your Life (1950)
Muriel Whitchurch

The Importance of Being Earnest (1952)
Miss Letitia Prism 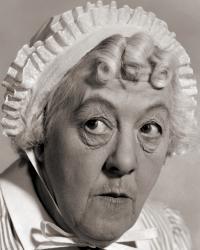